Originally from the USA with over 20 years of experience in footwear product creation I have been an expatriate in Ho Chi Minh City since 2009. I joined New Balance in 2014 as Director for Running Footwear and am currently the Head of Footwear Development for all Asia.
My arrival to Vietnam in 2009 with Nike was focused on growing the country as a source for development of footwear and expanding the local knowledge beyond manufacturing.  The factory and brand teams were coached and mentored on how to receive new designs and build the first prototypes for testing and marketing. All aspects of footwear craftsmanship, performance, cost, and manufacturing were included in my approach.
I have created performance athletic footwear for multiple sports and for elite athletes from Track and Field, Football, Running, Outdoor and Basketball. Those shoes have been worn by athletes to train and win at the highest levels of sport. 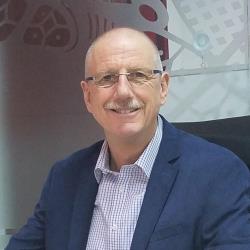 Over 4 decades of solid experience in the footwear industry working for leading brands and manufacturers.  A key player involved in the introduction and implementation of Lean to the athletic footwear industry in Asia, providing hands on shop floor training and consulting both internally within the brand and externally with Tier 1, 2 & 3 supply chain partners.
Originally from the UK he has also worked and travelled extensively throughout Asia bringing a unique perspective to lean and efficiency founded on basic shoemaking fundamentals adapted with an in-depth understanding of Asian culture.